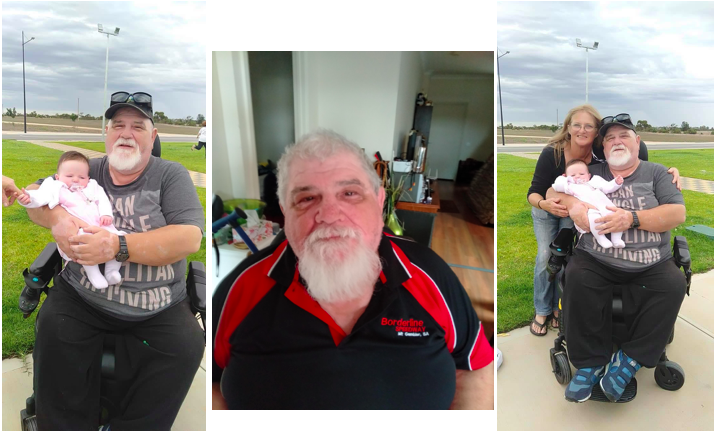 This week we chat to Mark Gunn, a man who is well-spoken and has a keen interest in wartime films, sports and being involved in his new community since recently moving to Adelaide, alongside his family.

Tell us a bit about you, your age, disability and current situation?

I’m 61 years of age, I have Myasthenia gravis disease, which means I am currently in a wheelchair. I live at home with my wife and we’re bringing up three grandchildren.

Tell us about your family and your background?

My grandchildren are Brayden, 14, Jessica, 14, and Brooklyn, 12. They enjoy doing the normal teenage stuff. Like most kids, they have their good days and their bad days at school. They like mixing with their mates. We had to move from Mount Gambier to Adelaide for my treatment. I was brought up in Kalgoorlie, but lived most of my life in Port Augusta. Then moved to Mount Gambier, was in Mount Gambier for over 20 years. I was told that they don’t have the treatment in Mount Gambier, so we had to move to Adelaide, and for a while there I was having weekly paresis treatments, hence the shift.

Do you enjoy living in Adelaide and what is the best thing about it?

I’ve only lived here a couple of years. I love Adelaide! The services! Not only the medical, which for me is done through the Royal Adelaide, which I believe is the best hospital in the country. But, the services and opportunities available for the grandkids who are with us.

Tell me about your sporting interests?

I love my footy and my cricket, and once the footy starts again and the cricket gets running again, then that’s my outlook, to get to those games. I also like going to museums. I’m an Adelaide Crows supporter, but my wife is a Port supporter. I’ve been to one game since we’ve been down here, last season, towards the end of the season. What I want to do is when the cricket starts again, I’d love to get down to a Big Bash game, that’s just an awesome cricket game. I like all cricket, I don’t care whether it’s Test, One Dayer’s, Big Bash, it’s just that type of game. I love watching golf, I used to play golf before I got put in a wheelchair.

Do you enjoy listening to music and watching films?

Country music’s my favourite. Rock and roll, 50’s, 60’s, I am a big AC/DC fan. I like all the older stuff. Sherbet, even up to bands like Iron Butterfly. Any of that type of music basically. I’m a western and war buff, and crime movies. Any films spring to mind? The Dam Busters, John Wayne is one of my favourite actors. The Green Berets. Lethal weapon, The Bourne film series, The Expendables.

How have you been getting involved in your local community and what has been an achievement you’ve had? Have you made friends?

I joined up with DRAKES, and the wife works part time with the greyhounds. I like going for a coffee, going to a café, just having a coffee and a chat. The area I’m in, Hillcrest, there’s a few people that are in wheelchairs, so you get to see them when they go out and have a coffee. I like a chai latte, yeah, I love my chai latte. I used to drink a lot of cappuccinos but now I have chai lattes and I love them. After the coronavirus situation clears up I’ll get back to doing hydrotherapy again. I miss the friendships, all the boys and girls at the hydro, so once that gets started again that will be great! I did that once a week, at the Women’s and Children’s hospital. There’s a mob of us, and we’ve formed a tight group.

Then there is also the out and about luncheons, which are also awesome. You meet some other people that don’t do hydro, so you get a good mix of people. You learn a lot, and I’ve joined up with the Myasthenia group on Facebook, so we constantly talk to different people and if you’ve got advice you can help other people, and if they’ve got advice they can help you. So, it’s a great group to be involved in.

What are the barriers for you to overcome and the challenges you’ve faced?

The hardest thing to overcome is the ignorance of some people, who will walk straight in front of a chair and then they abuse you. I was at Modbury Exchange, on my way to a doctor’s appointment, got off the bus and was going down the walkway, and some bloke absolutely tore into me. Calling me some horrific names. Telling me to get out of my chair and walk, that type of thing. That’s the hardest thing I find to overcome. Most of the time I think a lot of it is that people don’t understand. They don’t understand and they tend to handle it in an aggressive manner. But we’re no different. The only difference with us is that we’re not on our feet, we’re on our bum. Apart from that we’re no different from anybody else. There’s still a lot of discrimination that needs to be sorted out.

How do you believe the discrimination towards yourself and other disabled individuals can be stamped out of society?

Education! It’s as simple as that. The government needs to do a lot more with educating people. The education needs to be out there on TV and on radio. To let people, know that they’re not going to give them some sort of disease. That we’re no different to them. Just treat us with the same respect they would like to be treated with. I think it is as simple as that. What have your grandkids said about the learning that they’ve received about this issue? They’ve learnt very quickly. Because they’re so used to it, it’s not an unfamiliar issue. They’re accustom to it.

What is a positive about the NDIS for you and how does the scheme assist you?

NDIS has become a lot friendlier. They now understand that your partner needs to be taken into consideration. Initially, the NDIS didn’t consider your partner as important or any part of it. With them changing that thought, and including the partner, it makes life simpler.

There’s still a lot of inconsistency with NDIS. They were supposed to send a new plan to my coordinator and to me after 24 hours. A week later my coordinator was still chasing them for the plan. Sometimes they’ll grant something you need within a week or two, and other times it won’t happen for three or four months. It’s that sort of inconsistency which is frustrating. But on the other side of the coin, when they do deal with it they get things moving.