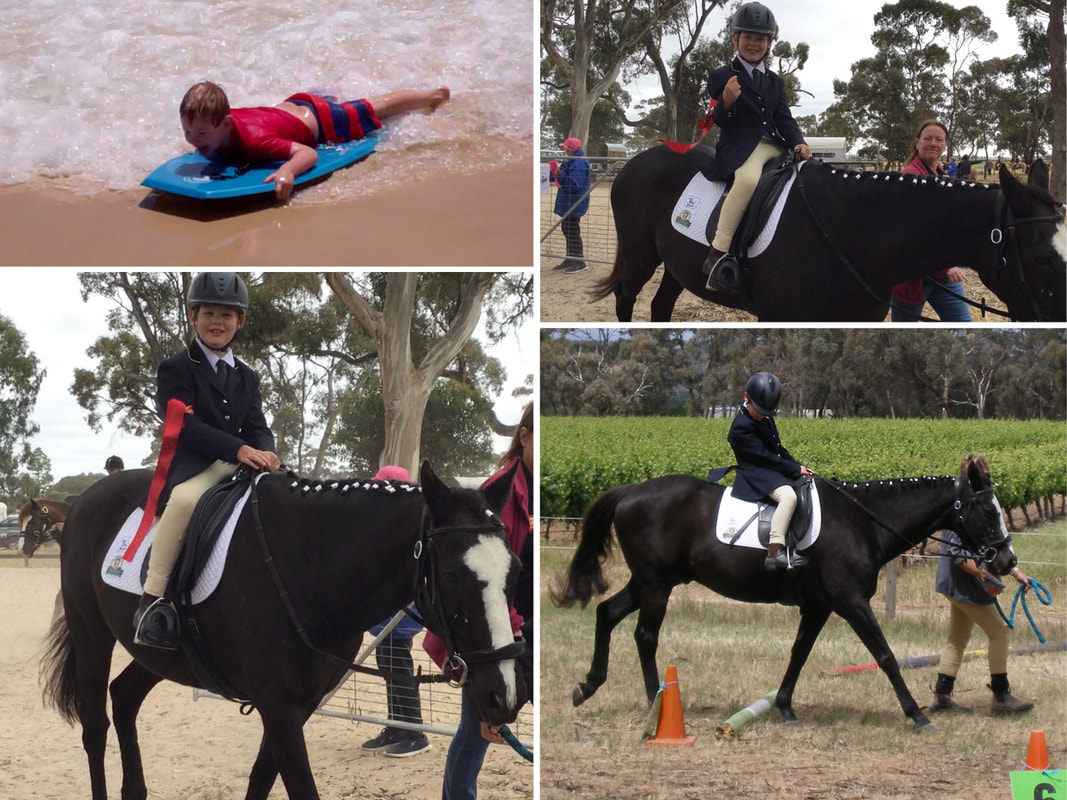 This week we chat to Edwina Nicholson about her son, Jay, who loves boogie boarding, riding horses, playing basketball and listening to music, as well as the positive power of the NDIS.

Tell us a little about Jay, his age, disability and current situation…
Jay is 8 years old now. He has a chromosome duplication and Autism. A lot of areas of his development are affected, and he has severe language delay and a learning disability.

Share with us all the amazing things Jay can do, especially those that people in his local community may not realise he can do?
He loves the water. He is still learning to swim and does hydrotherapy as well. Surf beaches are a favourite. He absolutely loves to go on his boogie board, even though he started before he could swim.

He enjoys sport. He has a basketball hoop on his trampoline, and he’s quite tall, so perhaps might be a basketballer one day. He’s starting to shoot hoops, and do those basic things – and as a parent it’s great to see those natural childhood skills start to build.

Although he’s not talking in an age appropriate way, hearing him develop his sentence structure and building his own awareness to self-correct his language has been wonderful. It’s something other people might take for granted but is so pleasing for us to see.

Jay also loves music and dancing. I’m sure listening to his music CDs has been instrumental in his speech and language development. He loves his dog (who is now 16 years old), and recently allowed a bearded dragon on his shoulder, but he particularly likes giraffes. He has done giraffe feeding at Adelaide Zoo twice now. He’s not at all daunted by their amazing stature. Jay was intrigued by their long dark tongues, which curled around the food as they gently took it from his hand. Jay also enjoys playing and interacting with other kids – he’s quite the social butterfly.

What has been his biggest achievement to date? How did he achieve such big heights?
He rides with Barossa Light RDA and has been doing that since late 2016, when we moved to South Australia. In NSW, we did a hippotherapy program which he enjoyed and when we moved, he was able to join the local riding program. He’s now sitting in a saddle and starting to learn parts of riding, which is not anything I would have thought possible.

He had an opportunity to ride as part of a team at the RDASA Games, and participated in three events. We weren’t sure how he would go on the big day, but he rose to the occasion, took it all in his stride and gave me a huge high five at the end of the day. That was the icing on the cake! The team also won, which was totally unexpected, and he was blessed to be part of it all. Because his team won, they got their photo in the local paper with them all holding the huge trophy. That was the biggest buzz!

Also through the RDA, Jay had the opportunity to participate in a mainstream pony club event in the novice category. He is very proud of the ribbons he brought home. This was an opportunity that we could never have expected and for which we are totally indebted to the RDA volunteers and pony club.

What has been the hardest barrier for him to overcome?
Ultimately, communication has been the hardest part for Jay. When he can’t get his message across, his behaviour changes. When we moved to a new state, everything went fairly smoothly and we thought Jay coped well with all the change in our lives. Except he didn’t transition too well to school. His communication issues meant he couldn’t express himself verbally in the new setting, so this has definitely been the biggest hurdle. He is also still learning social cues and rules for interacting with people.

What is one positive thing about the NDIS for you and how do you think the scheme will assist inclusion in your community?
The NDIS opens doors. The system gives help and unlocks access to support. In our case, with all the change in our lives over the past 18 months, it has been a huge blessing. Particularly this year since changing to self-management. Initially on moving to SA and Jay becoming an NDIS participant, my focus was on finding therapists and understanding the local services, rather than managing the plan myself. But after a while, I found that more and more restrictive. Self-managing this plan has been a life changer for us. We can now access non-NDIS registered services that are right fit for Jay. And that’s the true positive of the system – giving each participant the power to get the support they need.